First doesn’t always mean the best. When 1962’s Dr. No was released, James Bond was just a character on the pages of multiple Ian Fleming novels. What movie producers, Albert “Cubby” Broccoli and Harry Saltzman, were able to do was to breathe life into this spy character’s world.

Dr. No is the jumping off point for a film franchise now in its sixth decade. Audiences in the early 1960s had never seen such a vivid world of danger, sex, and globetrotting. This is why the first film is so important to the legacy of Bond.

Bond’s coolest moment? His first ever scene, the one in the casino. Saying the name “Bond, James Bond” is beyond iconic and cool.

Bond’s most embarrassing moment? Singing “Underneath the mango tree…”

Bond’s best line? “I think they were on their way to a funeral.”

Best acting performance? It’s got to be Connery. Early Bond/Connery is a terrific mix of menacing and charming.

Bond’s #MeToo #TimesUp moment? Even though she is clearly bad, Bond really does force himself on Miss Taro.

Worst line in the movie? Bond demanding to Quarrel: “Fetch my shoes.”

What I noticed for the first time after watching this for the 82nd time? When in M’s office, Bond offers to light M’s pipe and M declines.

Best action sequence? The one at the end in Dr. No’s lab is about as far of a true action scene as you will get in this movie.

Best looking cinematic moment? If there is one thing this film has it’s colorful, eye-popping cinematography. You can’t go wrong with Honey Ryder (Ursula Andress) coming out of the water.

How could the villain have succeeded? Get better hench-people. The “three blind” men. The jittery chauffeur. A freelance photographer. Professor Dent and his faux-Chinese secretary. Cmon Dr. No, you work for SPECTRE. Call up Blofeld and get some real help.

Which other Bond actor could have starred in this movie? No one else. Producers cast Sean Connery, a diamond in the rough, and it worked beautifully.

Does Bond ever think he might die? He’s sweating quite bit in bed with that tarantula crawling up on him.

What would have made the movie better? More action set-pieces and more exotic locations.

What’s in a title? “Dr. No” is the name of the villain Dr. Julius No, which comes from the same name of Ian Fleming’s novel.

Drinking game: Drink a medium dry vodka martini each time the James Bond theme is played throughout the film. From opening credits to end credits, and every scene in-between.

Fun fact: Thunderball was originally going to be the first Bond movie.

Review synopsis: This Bond flick won’t set your heart racing, but it’s a well-made detective story and it gives us the first of many Bondisms. Connery looks the part and instantly becomes James Bond with his first couple of lines. An audience watching it today might get bored, but it’s understandable why an audience in 1962 was wowed. A movie legend was born. 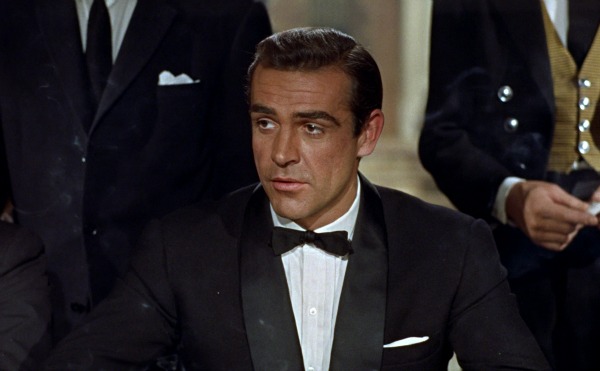