For this article I’m going to need Mr. Lazenby and Mr. Dalton to leave the room. Sorry gentlemen, but this is a club for only Bond actors who have played the role at least three times.

Why at least three times? That’s because there is a case to be made that a James Bond actor doesn’t hit his prime until his third turn at the role. There are three 007 actors that can claim that their best, or most popular, Bond movie took place on their third try. The other Bond actor left, not so much.

Sean Connery’s third Bond movie was Goldfinger. Even if you have never seen a Bond flick before, you know about Goldfinger. In 1964, it was THE movie to see in the theater. It was well before my time, but I think I came out of my mother’s womb knowing the classic scenes and humming the theme song. It’s the most iconic Bond movie there is. Even though I like it more than I love it, I completely understand why most critics and fans have it down as their number one 007 film. Connery is probably more lethal and excellent in Dr. No and From Russia With Love, but by the time that pre-credit title sequence comes on, you know he has made the role of James Bond his own.

By the time the summer of 1977’s The Spy Who Loved Me hit theaters, there was a chance that the Bond franchise was done for. Live And Let Die and The Man With The Golden Gun were underwhelming in the eyes of many Bond viewers in the early 70s. Roger Moore just wasn’t Sean Connery. Well, in his third movie he learned he didn’t have to be. By the time James Bond skies off a mountain, and opens up a Union Jack parachute, audiences could just feel Roger Moore hitting his Bond prime. The humor, the raised eyebrow, the suave-over-dangerous manner. This wasn’t Roger Moore as James Bond. This was James Bond as Roger Moore.

Some 007 movies have it all. Just like Goldfinger and The Spy Who Loved Me, Skyfall is the modern equivalent. Take a memorable villain, add an all-time great theme song, and you have Daniel Craig’s third go-around becoming the highest grossing Bond film of all-time, and even considered for a Best Picture nomination at the Oscars! 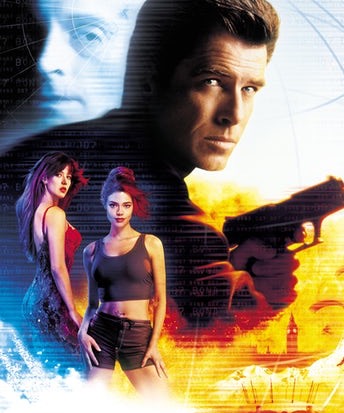 Let’s rewind a bit. Before we had Craig defining what it means to be James Bond, we had Pierce Brosnan. A man who looks like he was born to play the role. Brosnan’s best Bond movie is his first. Most critics and fans agree about this when it comes to Goldeneye. His third movie, The World Is Not Enough, does not stand with the other three, third-times-the-charm, Bond pics as a great one. Although, a case can be made that Brosnan does his best acting in this one. Let’s be honest, it couldn’t have been easy for him to act along side Denise Richards (the second worst Bond girl ever). It’s interesting that in Goldeneye, Brosnan looks as smooth and cool as Connery/Goldfinger, Moore/Spy, and Craig/Skyfall, but come around to his number three and he has to force a solid performance just to keep the movie somewhat interesting.

Seven might be a lucky number, but for most 007s, the number three hits the jackpot.

One thought on “Three Is The Magic Number”