Roger Moore and Daniel Craig will never be confused for each other. About the only thing these two Bond actors have in common is that they’re the only two British Bonds. Moore’s style was tongue-firmly-planted-in-cheek, while Craig has just had a bloody cheek. I mean this literally! A rough day for Moore’s Bond was getting his hair out of place. If Craig’s Bond isn’t bruised and bloody, well then he hasn’t been doing his job.

The most glaring difference in their performances has to be in the sense of humor department. Roger Moore was Roger Moore as James Bond and the audiences of the 70s and 80s ate up the camp. Daniel Craig is Ian Fleming’s James Bond and has been the gritty Bond we need for this current dangerous world. The only other actor who is closer to Fleming’s interpretation of the character is Timothy Dalton.

With Craig’s 5th and final turn as 007 coming in November 2019 (he will pass Moore as the longest serving Bond in years, sometime in 2018), it begs the question… was his most recent movie, SPECTRE, as Moore-ish as Craig will get? Allow me to go all Jim Garrison – JFK investigation on this.

After Bond blows up a building in Mexico City, it rapidly becomes an escape from his own collapsing structure. After sliding down falling debris in his beautiful Tom Ford suit, Bond lands perfectly on a couch. I’ve read other theories on this scene that believe a more appropriate landing spot for Craig’s Bond would have been on his ass right next to the couch. Nothing ever comes easy for this Bond. Yet, the screenwriters and director Sam Mendes pulled the full-Roger for this one. The only thing Craig missed doing was the accustomed straightening of the tie and cuff links.

Bond’s gadgets don’t work. He accidentally starts playing “New York, New York”. He bumper-nudges an old Italian man driving a tiny car, that is blasting opera of course. He also has time to call Moneypenny and inquire about her social life. Not quite as campy as the car chases from The Spy Who Loved Me or For Your Eyes Only, but not too far off. And perhaps the greatest sin of all is that the Bond vs Hinx vehicular combat is boring.

Daniel Craig’s 007 isn’t known for his pithy comebacks, while Roger Moore’s jokes came out of left field…and right field, and center. But SPECTRE did give Craig some one-liner opportunities. The best one being a laxative joke. Pay attention to Craig’s humor in his four films. It is there, in the shadows, and it is very snarky.

The Roger Moore Bond tilt of the head is a classic move. It says “yes, I’m in danger, but this is also fun”.

Craig does his own “salute” when chasing Hinx’s jeep with his plane. Check out 00:40-00:55 of the video. It’s not quite as playful, but it still says “yes, I’m in danger, but this is also fun…oh and I’m slightly insane.” 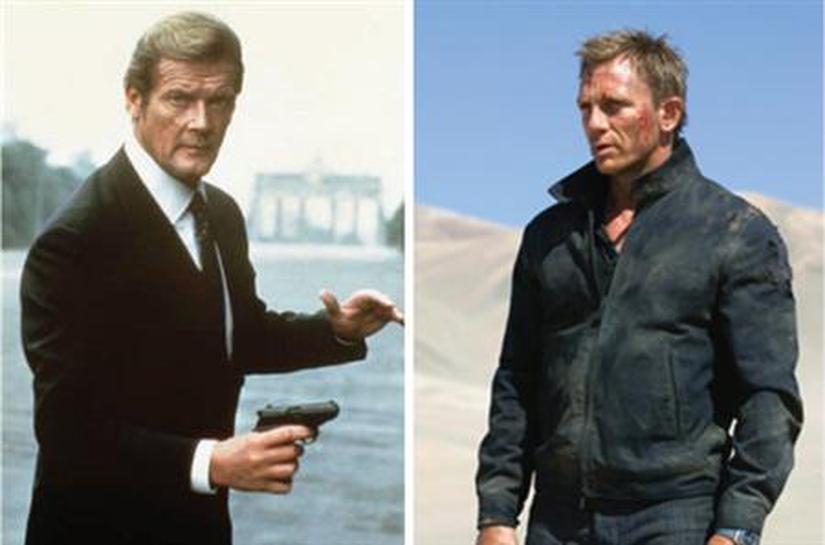 Could you swap any of the seven Moore Bond movies for Craig’s four films? It’s highly doubtful. Being British and the two longest serving 007s are the only thing these two Bond greats have in common.