With Halloween a day away, it got me thinking about some horrifically, disturbing scenes in the Bond movie franchise. I’ve come up with my most bizarre seven.

Clowns are always scary, so imagine Richard Kiel as Jaws dressed as a clown puppet, in a dark alley, during a freaky night of carnival in Rio.

Jaws meets Jaws (The Spy Who Loved Me)

Now that I think about it, Jaws could have his own list. The character is clearly named after the famous movie shark, so it shouldn’t be surprising when he fights a shark at the end of the movie. But for me, watching “man bites shark” still kind of freaks me out.

Now on with my personal Bond creepy countdown…

7. Jaws is hiding in a closet (The Spy Who Loved Me)

Like I said, we are gonna need a bigger list thanks to Jaws. Here he is hiding inside Agent XXX’s train closet. He’s been perfectly still and quiet that whole time. Yikes! True story, actress Barbara Bach’s frightened reaction wasn’t acting.

6. Saunders gets sliced in half (The Living Daylights)

Saunders is one of those effeminate characters that Bond bullies around. However, when Bond witnesses him getting sliced in half by a sliding door controlled by Necros, you can see Bond’s emotional reaction. Keep in mind, this is at an amusement park. There are kids there with balloons and everything!

There is something both sad and horrifying the way May Day sneaks up behind Tibbett, and chokes him out. The music is menacing. The last thing you would ever think about, while going through the car wash, is Grace Jones popping up from the backseat and killing you.

Nothing else really needs to be said here.

3. Corinne gets torn apart by Drax’s hounds from hell (Moonraker)

Let me remind you that Moonraker is one of the most light-hearted Bond movies ever! But this scene is straight out of those creepy, horror movies of the 70s like The Exorcist or The Omen or Halloween. The music! The woods! Horrible way to die.

This may not be the second scariest moment in Bond history for many, but it has always creeped me out. Bond is looking for another fling with Ruby, but Irma Bunt is waiting for him in bed. And then you have Bond having some freaky Christmas hallucination after getting bonked on the head.

Milton Krest is one of those scumbag secondary villains that deserves the death he gets. However, this one is rough as it is the goriest death in Bond franchise history. Franz Sanchez kicks Krest inside a decompression chamber and turns the pressure valve to the highest level. Then ruptures the vent with an axe. The rapid decompression causes Krest’s head to expand and then explode like a tomato in a microwave. 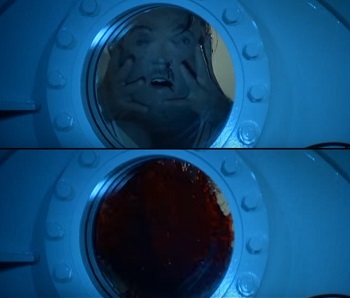