We all like playing the “what if?” game. So it’s no surprise as a Bond-fanatic, that I find unused movie plots fascinating. It’s usually a case of the producers, writers, directors making the right cinematic choice. But every now and then, you might find one or two options that would have improved a James Bond flick. 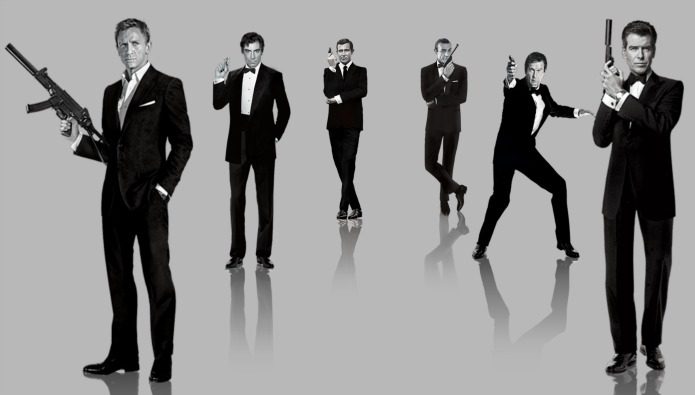 Dr. No was the first movie villain 007 had to face. But before Joseph Wiseman was cast as the titular character, the idea of a monkey playing Dr. No was bandied about. That’s right, a monkey! After coming to their senses, producers decided against it, thinking that a monkey, even with a high IQ, couldn’t make for a credible villain.

With Sean Connery leaving before On Her Majesty’s Secret Service, there was talk about mentioning that Bond got plastic surgery, since a new actor (George Lazenby) had been cast. Luckily this silly idea didn’t go far. Can you imagine Bond having facial surgery each time a new actor took over?!

The original storyline for Diamonds Are Forever had Auric Goldfinger’s twin brother out for revenge. As wacky of a concept this might have been, it could have worked. You had Sean Connery back, as well as Goldfinger director Guy Hamilton. A true reunion. Plus, a twin who is as obsessed with diamonds, as his brother was with gold? I can buy it.

Do you ever look at Stromberg from The Spy Who Loved Me and think he’s just a low-rent Blofeld? Well, you are onto something. The original plot of the film had Blofeld behind all the submarine hijacking. Of course, lawsuits with Kevin McClory (the then rightful owner of SPECTRE/Blofeld) took place. It would have been cool to give Roger Moore at least one crack at defeating Blofeld as a main villain in one of Moore’s seven turns as Bond.

Early in the pre-production of The Living Daylights, thoughts turned to making the story a “Bond begins” tale. A new Bond (Timothy Dalton) doesn’t mean you have to start from the beginning. Dalton was younger than Moore, but he wasn’t young enough to play a “wet behind the ears” 007.

The original script of Goldeneye had to be rewritten because many of the elements were too close to the blockbuster action movie True Lies, starring Arnold Schwarzenegger. The Bond movie also had Dalton (not Pierce Brosnan) in mind.

Quentin Tarantino had his own unique take on Casino Royale. It would have taken place in the 1960s, set immediately after Bond loses his wife Tracy in OHMSS, Brosnan and Tarantino were joined at the hip for this project, it would have been shot in black & white, and Uma Thurman would have played Vesper. Bond producers threw this idea out the window, and replaced Brosnan with Daniel Craig. Can you imagine Tarantino directing that scene where Le Chiffre tortures Bond?! Ballsy!

Before Skyfall became the highest grossing Bond movie of all time, it was called Once Upon A Spy. Peter Morgan penned a script that made Silva (named would have been changed) M’s son from an affair with a KGB agent in Berlin, during the Cold War of the 1960s. At the end of the movie, Bond is ordered by the British government to assassinate M. Now that’s dark.

Spectre‘s script (sigh) is what it is. But the original script (the one during the SONY hack) did have some interesting tidbits. Rather than the drilling torture scene, Blofeld and Bond play a life or death game of poker. Also in the script, the two men being foster brothers isn’t as big of a deal as the movie makes it out to be. And perhaps the most interesting thing left out is the final life: Bond tells Madeline “We have all the time in the world.”