How do you top the success of Goldfinger? Bond filmmakers sure did try their best with the followup, Thunderball. To this day, Thunderball remains the all-time highest grossing James Bond movie at the box-office…adjusted for inflation of course.

The film has lost a bit of its luster over the past few decades, but there is definitely a lot of Bond bang for your buck. Sadly, this was also the start of many troubled Bond productions and Connery going from being in his prime to lazy efforts. 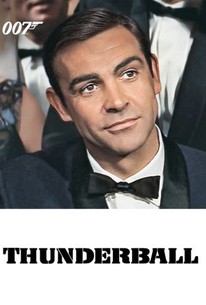 Bond’s coolest moment? When he goes to the casino in the Bahamas. He does just enough trash talking to the villainous Largo, while still being smooth on the dance floor with Domino. A close runner-up is this scene with Fiona.

Bond’s most embarrassing moment? Being strapped to that machine at the health clinic that is pulling him like he’s a piece of taffy. Maybe that’s the moment Sean Connery knew he wanted out of this role ASAP!

Bond’s best line? After Domino says to him “What sharp little eyes you’ve got.” And James mutters: “Wait till you get to my teeth.”

Best acting performance? Luciana Paluzzi as seductive henchwoman Fiona Volpe. She brings a real energy to the role, without every making it feel campy.

Bond’s #MeToo #TimesUp moment? First off, forcibly kissing the nurse at the health clinic. Then threatening her job, unless she has sex with him in the steam room.

Worst line in the movie? When Bond tells Moneypenny he’s going to put her over his knee for a presumed spanking, she replies with “On lemon juice and yogurt. I can hardly wait.”

What I noticed for the first time after watching this for the 84th time? When the faux-Francois skyjacks the NATO plane, and knocks out the rest of the crew with gas, literally just a few seconds earlier we see a crew member eating a sandwich. How did he get knocked out without a mask on?

Best action sequence? Bond escaping from Fiona and Largo’s men during the Junkanoo.  I guess the underwater battle at the end, but the pacing is a little off for me.

Who or what is the title song about? Tom Jones is singing about how cool and suave and dangerous 007 is. But I think if Largo was listening to the lyrics, he would think it was about himself.

Best looking cinematic moment? Bond on the beach with Domino. It looks half From Here To Eternity and half Caribbean postcard. She might be the best looking Bond girl ever. In fact, every lady in this looks top notch.

How could the villain have succeeded? As usual with most of these villains, they love spending time just hanging out with James. I think Largo believes he and Bond are soul-bros.

Which other Bond actor could have starred in this movie? None. This is very much a Connery-Bond movie. He also seems a natural fit for all scuba scenes. He’s a great swimmer.

Does Bond ever think he might die? There’s some real worry on his face being chased around during the Junkanoo. He’s been shot in the ankle, doesn’t really know where to go, and there’s something about Fiona’s ice cold demeanor that would scare any agent.

What’s in a name? Bond doesn’t use an alias in this, although he really should. He does some good detective work in this movie, but probably shouldn’t be telling everyone his name is James Bond.

What’s in a title? Thunderball comes from the novel by Ian Fleming. Although, Fleming allegedly took the title and much of the story from an annoying man named Kevin McClory.

Drinking game: Drink a glass of Rum Collins each time you see a shark on screen.

“WTF?!” moment: Continuing with sharks; Sean Connery’s face when he comes face to face with one in the pool. Yeah, I don’t blame him for being pissed at the producers. By the way, while we are on the subject of sharks… how many sharks were killed during the production?

Fun fact: The ending music on the DVD Blu Ray is not the same as in the original movie. Here’s the original:

Review synopsis: Connery is at his charming Bond best, and director Terence Young knows how to make a film look beautiful and colorful. The leading ladies are a feast for the eyes, and Largo makes for a memorable villain. The plot lacks the tension of From Russia With Love, and the zaniness of Goldfinger, but Thunderball is a pretty solid 007 adventure.