We all know James Bond lives a dangerous lifestyle. From all the smoking, the drinking, the unprotected sex, and avoiding murder just about everyday, it truly is “death for breakfast” for 007.  But there’s one part of Bond that we don’t focus enough on. His mind.

I’m not even going into the psychological scarring that he has endured his entire life (death of parents at a young age, the hundreds and hundreds of people he has murdered, sex with May Day, etc.). I’m talking about all the blows to his head (raises a Roger Moore eyebrow) he has suffered in 24 films over the last 55 years.

Football players aren’t the only ones who should be weary of CTE. Bond’s employers over at MI6 better make sure he has a CAT scan from a neurologist. Chronic Traumatic Encephalopathy (CTE) is a progressive degenerative disease of the brain found in people with a history of repetitive brain trauma. It’s the dire condition that Will Smith tried to explained to NFL fans in the film Concussion.

It’s extremely dangerous for a human being to lose consciousness for long periods. In this case study, I won’t even count how many times 007 has passed out from poisonous gas, or a dart or a drink. Strictly sticking to blunt force trauma to the head and neck region.

From Russia With Love: Bond is knocked out for nearly a full minute after being hit on the back of the head by Grant’s gun.

Goldfinger: Bond takes a karate chop to the back of the neck from Oddjob, while checking the fridge for champagne, but after he insults the Beatles’ music. Bond is out for a damn long time. Long enough for his new girlfriend, Jill, to be covered head to toe in gold paint.

You Only Live Twice: Knocked out cold by a Kobe docks worker, with what appears to be a wrench or solid piece of wood. James doesn’t wake up until Helga Brandt slaps him around.

On Her Majesty’s Secret Service: Bond is trying to have sex with just about every girl at the Swiss health clinic, but unfortunately ends up lifting the sheets up to find the frightening Irma Bunt. He’s then hit over the head by an unseen thug, has some weird LSD-type of visions, and is finally awake to hear Blofeld wish his a Merry Christmas.

Diamonds Are Forever: While retrieving money for diamonds at a funeral home, Bond is hit on the back of the head with an urn by Mr. Wint and Mr. Kidd. It takes being nearly burned alive in a coffin for Bond to wake up.

Live And Let Die: Tee-Hee uses his metal wrist/claw to strike the back of Bond’s neck. Bond is out long enough to be dragged into a car, headed for a gator farm.

The Man With The Golden Gun: Bond takes a blow to the back of the head from Nick Nack’s toy-looking trident.

Moonraker: Bond is making out with Holly Goodhead on the grass, when faux orderlies spoil the moment with a club to the back of the neck.

For Your Eyes Only: Even when it’s the good guys, James still takes a beating. On the beach, kneeling over yet another dead lover, 007 gets hit on the back of the neck with a harpoon gun by one of Columbo’s men.

A View To A Kill: Another gun to the back of the head deal. Bond only wakes up as the car he’s in is about to sink to the bottom of a lake.

Licence To Kill: A double whammy here. First knocked out by ninjas and then right after, an explosion causes debris to fall on Bond’s head. He wakes up to the most bizarre statue ever.

Spectre: After taking a club to the knee, Bond gets hit on the back of the head after listening to Waltz’ Blofeld give a little speech. 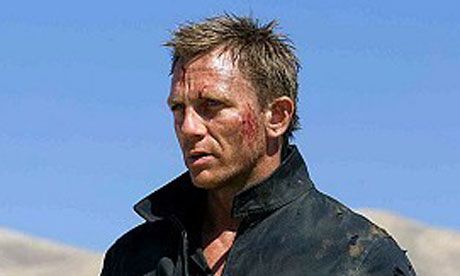 One thought on “Does James Bond Suffer From CTE?”